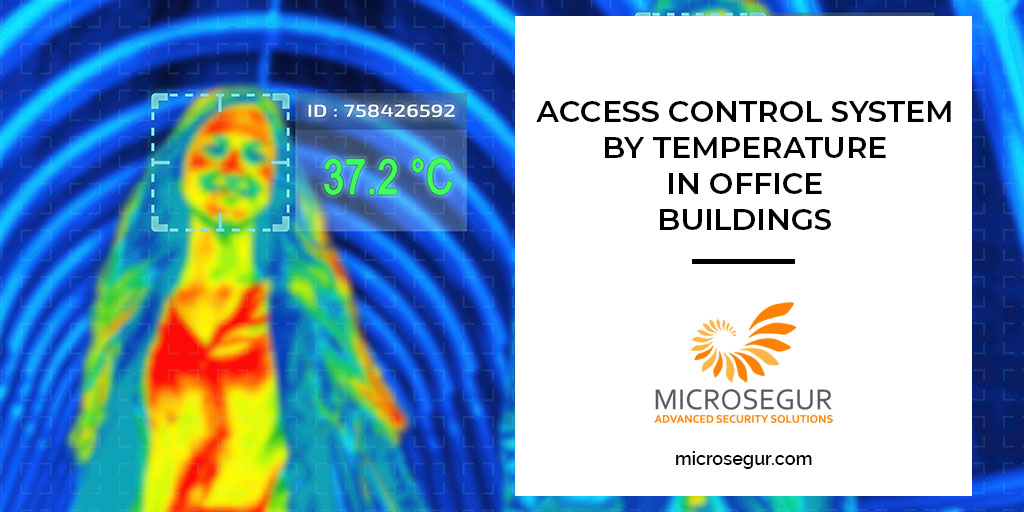 The world we knew before the coronavirus pandemic will not be the same as the one in which we live once the expansion of the virus has been overcome or controlled. Prevention measures are going to increase significantly in public spaces and workplaces.

Access control system by temperature in office buildings is a measure that is already being implemented and has a long way to go. What is intended is to provide work spaces with mechanisms that prevent access by people with symptoms of the disease, such as fever. In this post, we are going to explain everything that thermal imaging cameras can do to help you stop this pandemic and other possible infections.

The answer is very easy. When many people constantly enter and leave a space, be it an office or a public center, there is a high possibility that a percentage of them are infected with coronavirus. The only way to do a quick and safe check is to do body temperature control, since fever is a symptom that reveals this and other possible contagious diseases.

It is a preventive control measure, thanks to which we prevent a possible COVID-19 infection from accessing the facilities. Potentially, thanks to the use of thermal imaging cameras, we are avoiding many infections, given the high degree of spread that this disease has, controlling the temperature in real time of large flows of people without the need to interrupt their mobility.

Thermal imaging cameras have a lens capable of capturing thermal radiation from objects or people. There are models that also include a second lens, allowing the creation of a hybrid device that can capture images as well as the thermal emission emitted by objects. They have advanced technology that can measure the infrared spectrum emitted by bodies. To improve their measurement precision, they have a calibrating device called “black body”. It is placed vertically in the area where we are going to control the body temperature of people and it is programmed at a constant and known temperature which allows the thermal imager to automatically self-calibrate. This allows us to measure with great precision, thanks to the use of algorithms, the temperature of the analyzed object. This precision reaches +/- 0.3 degrees centigrade.

The thermal imager recognizes, with the help of artificial intelligence, people’s faces and can measure their temperature and rule out other possible sources of heat such as drinks or cigarettes. Being connected to a computer or an alarm center, we have the option of storing the images of the subjects that have a body temperature higher than the set temperature that we have programmed, for example 38ºC. It includes an alarm device to warn when someone with a high temperature intends to access the facilities.

There are different types of cameras for body temperature control. We will use one or the other according to the flow of traffic in the accesses, the distance at which it is located and the width of the access. The control of the thermal imagers can be carried out by means of a monitor connected directly to the camera or by means of a centralized system connected to the internet that can be operated from a surveillance post with a computer.

When we want to have a access control system by temperature in office buildings with many people, it is necessary to use large capacity hybrid cameras, which can recognize and read the temperature of several people at the same time. Groups of four or more people can be analyzed, recognizing and saving both their image and their body temperature.

Normally, several cameras of this type are installed to cover all angles as well as all possible accesses such as access to the parking lot, access of providers as well as the main access in such a way that there are no control dead spots. All this information is centralized in a virtual cloud and analyzed in real time by connected computers. When an attempt is made to access a person with a fever, an alarm jump can be programmed that alerts the surveillance service or blocks the access winch.

Normally a single hybrid camera is mounted, which can be portable or attached to a tripod. They are controlled on site by an operator who takes a temperature reading in real time and allows access by people who pass it.

These solutions can be ideal for medium or small offices, with little public access. Temperature detection can also be done automatically: people pass by and the acoustic or light alarm is triggered when fever is detected so that the person responsible for safety and health can intervene.

When we have an office with low traffic, we can use simpler and easier equipment to set up. They are normally hand-held thermal scanners that read people’s temperatures in real time. They can also be placed on supports. They only activate if they detect fever.

These small teams, which are more economical, have the capacity to read the temperature of a person approaching two meters with an accuracy of +/- 0.5º C.

The measurement totems are very practical for offices with a medium or low density of accesses. They are installed easily, as they are “plug and play” type devices that require only a plug and a wifi connection. It consists of a 1.70 meter high foot, which rests on the ground and is topped with a facial recognition and temperature measurement system. The person stands in front of the totem pole at a maximum of two meters, directing his face towards the camera, so that he measures body temperature and does facial recognition.

The importance of a good alarm verification service

We have to end this post insisting on the importance of having a good alarm verification service. Security facilities have active technological elements such as cameras, alarms, sensors or detectors that warn when there is a source of danger on which it is necessary to act.

In the case at hand, the alarm is the possible entry of an individual infected by a disease. It is still undue access, even if the subject is a facility worker as it can compromise the safety and health of the rest of the workers. By now, all workplaces will have strict regulations that prohibit access to people with symptoms — such as fever — to offices.

With an access control system by temperature in office buildings, if fever is detected and the corresponding alarm is raised, it is good to have centralized alarm verification services, so that they can notify security guards or personnel managers to locate them. the possible infected.