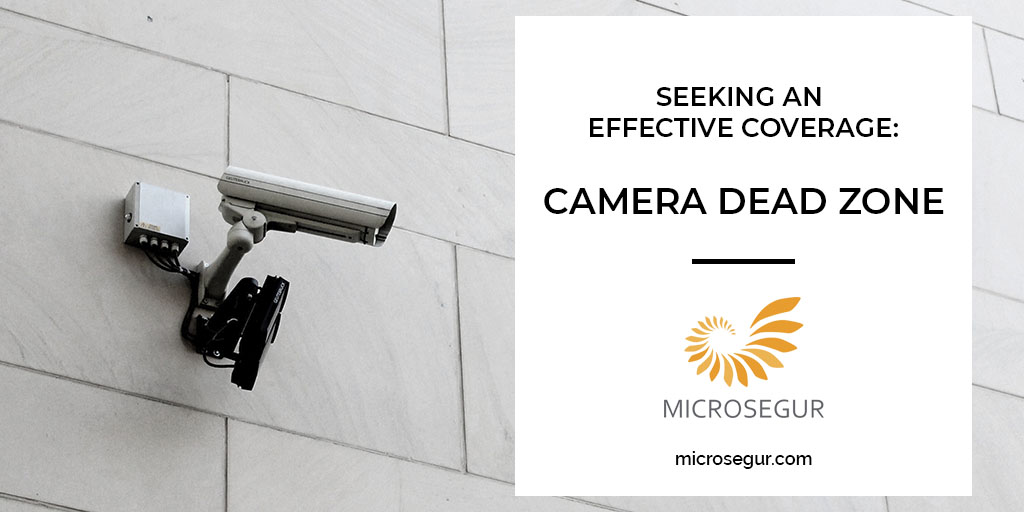 Posted at 14:10h in Seeking an Effective Coverage by Microsegur 0 Comments
0 Likes
Share

The ‘dead zone’ or blind spot of a camera is the area under the camera where the camera cannot view the ground and must be considered during CCTV system design. Camera positioning should be such that the dead zone of one camera is covered by another camera’s field of view.

The following figure shows the dead zone of a camera with a range of 100 metres and a its necessary field of view for an appropriate image detection and verification:

As shown above, the size of the dead zone is important enough to be considered. A man walking up straight can walk in front of the camera without being seen in the first 14 metres. An intruder crouching would have almost 23 metres to break in.

Long range cameras are very common in perimeter protection as they cover a great distance from just one point. Long range means, among others, narrow angle of view, as we want to see objects far away from the camera, big enough to detect and identify of a possible intrusion.

A problem that arises when using narrow lenses is that the field of view (FOV) in the area close to the camera may be “too” narrow, making it vulnerable to fast moving targets.

To ensure a good detection and verification level in this area, a minimum time of 2 seconds with an intruder inside the field of view should be considered. That, at 12km/h, which is a fair running speed, would make 6.6 metres of minimum horizontal field of view.

Dead zones must be covered by other cameras for design purposes. In some cases, the previous camera effective field of view will cover them totally or partially, therefore additional cameras will be needed when this does not occur.

Usual dead zone situations which need to be addressed

This is a very usual configuration where a camera located in a corner is partially covered by the preceding one. The panels next to the perimeter will block the preceding camera from covering the whole dead zone of the starting one. A short-range camera installed on the pole of the latter will solve the problem.

Necessary configuration when objects inside and outside the fencing may be confused from one another for alarm detection and verification purposes. Depending on the angle between both FOVs one or even two cameras will be needed to cover the dead zone.

Two cameras with opposite field of view

This is a rather unusual situation which may occur when we try to cover a part of the perimeter from the top of a hill or we cannot afford moving each camera back to make their FOVs overlap for range limitations. We have to say that in some occasions we have found this configuration installed by other companies as the “normal” way of doing things. A camera installed in a nearby pole whose illumination does not collide with the main cameras and vice-versa will work out this situation.

Terrain unevenness, plot shape and other influences may condition the positioning of cameras to fit in the perimeter as best as possible. This is perfectly acceptable if any dead zones have been covered, usually by including additional short-range affordable cameras where necessary.