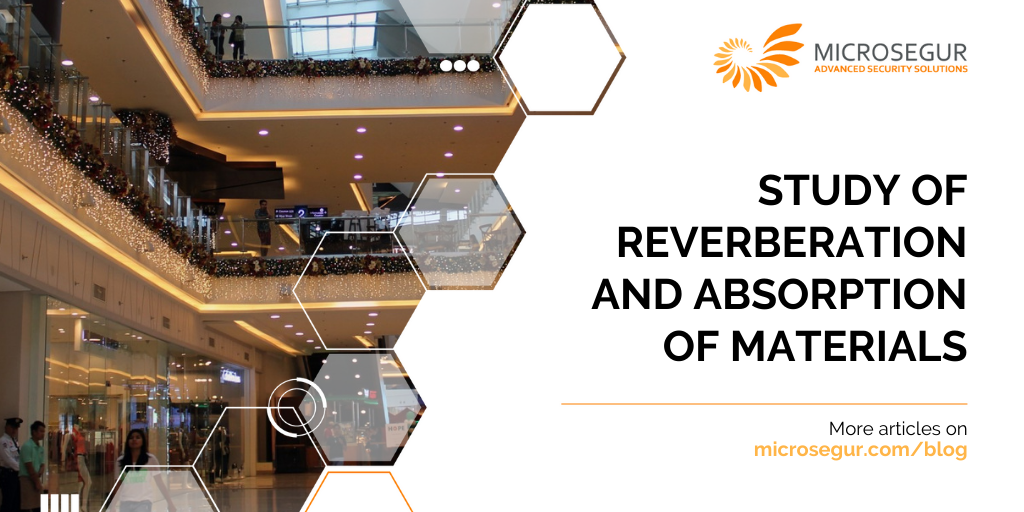 04 May Study of reverberation and absorption of materials

Posted at 10:54h in Industrial by Microsegur 0 Comments
0 Likes
Share

We will carry out a particular case in a commercial premises.

When a public address design is made, it is important to take into account the possible elements that affect the design. One of the important points is to know the impact on the sound of two basic elements:

In a certain room, the waves emitted from a sound source reach a certain point through two paths. On the one hand, sound energy is received directly from the source and on the other, the sound waves collide with the surfaces that limit the premises, giving rise to reflected waves which in turn reflect again, repeating the phenomenon many times.

Considering our sources as omnidirectional (Q=1), the sound pressure level Lp at a point is given by:

d = distance from the point to the sound source

R= constant of the enclosure. Characteristic amount of acoustic absorption

a–= am= Average absorption coefficient of the enclosure

We are going to suppose in this study to carry out a practical example that it is intended to provide sound for a commercial premises located in a corridor with a large area and whose main construction element is glass and aluminum panels as walls.

To calculate the average absorption coefficient of the enclosure, we model the premises under the following assumptions: 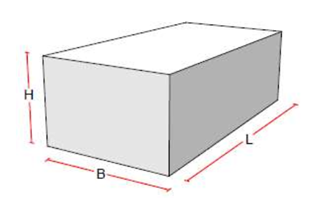 From this modeling we have that the equivalent absorption value measured in m2 Sabin is:

From the formula we obtain that the equivalent absorption value at each frequency is:

Obtaining an average absorption coefficient of the enclosure of am= 0.0406.

If from the initial formula:

We define the variation of acoustic pressure DL=Lp-Lw and we substitute in the different distances under study from the expected sound sources we have the following table of values. This table does not depend on the initial power of the equipment used, as it is a geometric characteristic of the premises and the capacity of its materials against sound:

Since certain modeling considerations have been made in order to carry out the study, we establish the value in units as significant value, considering the decimal calculation errors due to the model.

These values indicate that due to sound reverberations we will have an increase of 4 dB at each point with respect to the theoretical calculation value that comes out of the sound reinforcement study of the premises and taking into account only the influence of sound sources.

Finally, it would be necessary to consider in the study the effect of the people that may be in the marquee, which will act as absorbers of reverberant waves since the main projection of the sound is made on a plane at a height of 2.2 m, which is expected to be higher than the height of the people inside the marquee, not affecting the projection of sound energy in that plane.

According to tables for this purpose, the absorption coefficients of a standing person are:

Modeling the exposed surface of a person to sound as a prism with a height of 1.80 m, a width of 1 m and a depth of 0.5 m, we therefore have an exposure surface per person of:

We have that the equivalent absorption value will be

Being able to complete the table:

With this and from the formula:

We can calculate the value of the average absorption coefficient considering only frequencies above 250 Hz due to the type of loudspeaker used, as mentioned above, having that:

Calculating with it the reverberant sound absorption of each person DL=Lp-Lw:

Based on these data, we could consider the increase or attenuation to take into account in the sound reinforcement data of the premises. In this specific case, it could be concluded that the sound absorption of each person from the reverberant sound is greater than the sound increase generated by reflections of said sound. That is to say, in the theoretical study of public address coverage we will not consider the reverberation effect in the sound increase that could occur due to reflections in the materials of the marquee. In the same way, and since the main sound projection plane is greater than the height of people (2.2 m), attenuation of the main sound should not be considered in studios due to the effect of people who may be in the room. .

Study of reverberation and absorption of materials